Designed to handle professional workloads such as 8K HDR video editing, engineering, and manufacturing, AMD’s Radeon PRO W6000 series graphics cards are built to deliver high performance and power efficiency while adding advanced features, such as hardware-based raytracing, to your workstation. This is thanks to the AMD RDNA 2 architecture, which provides up to 94% better performance compared to the previous generation GCN architecture, with a higher graphics core count and the inclusion of AMD Infinity Cache to help minimize data bottlenecks. The performance boost is what convinced me to upgrade to an AMD Radeon PRO W6600 graphics card, which fits neatly between the high-end Radeon PRO W6800 and the Radeon PRO W6400 in terms of performance. All three cards support Variable Rate Shading (VRS) for intelligent frame rendering performance, in addition to Vulkan 1.2 and DirectX 12 Ultimate APIs, but I felt that the W6600 best suited my video- and photo-editing needs.

Featuring 1,792 stream processors powering 28 Ray Accelerators for hardware-based raytracing, 8GB of GDDR6 VRAM, and 32MB of AMD Infinity Cache, the Radeon PRO W6600 installs into a PCIe 4.0 x 16 slot to handle medium to high workloads. Out of the box, one of the most striking features is how slim it is, especially compared to my old 3-slot GPU. The compact design is not only impressive because of how much performance it packs, but fitting this graphics card into a single slot provides efficient airflow, especially when working multi-GPU configurations. Despite its size, the Radeon PRO W6600 has four DisplayPort 1.4 ports, supporting up to four 5120 x 2880 resolution 5K monitors or a single 7680 x 4320 resolution 8K HDR display.

I began testing the graphics card right away by firing up Adobe Premiere Pro to edit some 1440p footage I captured. Upscaling a 10-minute clip to 4K using H.264 compression took about seven minutes, which was just enough time for me to get a fresh cup of coffee, so I decided to take things further by using an hour-long clip. Reading from my internal M.2 PCIe 4.0 drive, down-scaling the video to 1080p took about 22 minutes and 30 seconds. Up-scaling that same clip to 4K took a while longer, clocking around 40 minutes, but still impressive.

For my final test, I cut together 1080p, 1440p, and 4K footage from a variety of sources, including two different cameras and my phone. I then added several music files and exported the project as an hour-long 4K H.264 video, pushing the bitrate to 50 Mb/s just to see what would happen. As it turned out, not much. The project, which would have taken well over an hour with my old graphics card, rendered in about 43 minutes.

Unsurprisingly, Photoshop performance was equally impressive. It hardly took any time to create a 16-bit per channel HDR photo from 4000 x 3000 RAW images. Contrast and color adjustments previewed in real-time, so the length of my project depended almost completely on how long it took to make creative decisions. Having that power at my disposal inspired me to create an 18 x 24" poster collage that used more than 100 images and layers. At 600 dpi image resolution, the Radeon PRO W6600 took less than 5 seconds to apply effects such as the built-in oil paint filter. The render time only increased by a second or two when I doubled the resolution to 1200 dpi, which confirmed that I chose the right GPU for my needs.

Although I didn’t make use of the hardware-based raytracing in my projects, the DirectX 12 benchmarks I ran on the Radeon PRO W6600 returned disappointing results. With that being the case, I can’t say for certain that this would be an ideal card for game development and media that relies heavily on raytraced graphics. On the other hand, the Radeon PRO W6800 is a better option for these kinds of heavy workloads.

With 3,840 stream processors, 32GB of GDDR6 ECC VRAM that can detect and correct common types of memory corruption, and 128MB of AMD Infinity Cache, this beast of a GPU is designed to make short work of the most demanding projects such as 8K HDR videos. By comparison, the Radeon PRO W6800 can render 2K images and animations from CAD data 60% faster than the Radeon PRO W6600 using SOLIDWORKS Visualize. Also, with more than double the stream processors powering 60 Ray Accelerators, the complex raytracing calculations should be considerably faster. The Radeon PRO W6800 also fits into two slots, making it easier to install additional GPUs and expansion cards while helping to ensure efficient airflow.

If you have the desk space for it, you can connect up to six 5K or two 8K HDR monitors to its mini-DisplayPort outputs. AMD Eyefinity technology allows you to manage and group multiple monitors into a single display for a smooth and comfortable workflow.

Users with light to medium workloads may find that the Radeon PRO W6400 is better suited to their needs. As the most budget friendly of the three Radeon Pro W6000 cards, this GPU offers 768 stream processors, 4GB of GDDR6 VRAM, and 16MB of AMD Infinity Cache to deliver dependable all-around performance. Although it doesn’t have the same graphical might as the W6800 and W6600, the card still offers many of the same features such as hardware-based raytracing using 12 Ray Accelerators and PCIe 4.0 compatibility.

The Radeon PRO W6400 is ideal for everyday productivity needs, allowing you to switch from spreadsheets to high-quality video conferencing without missing a beat. At the same time, it delivers the performance to handle a variety of architectural and 3D design workflows, in addition to image and video editing. Connect up to two 5K HDR monitors or one 8K monitor to its DisplayPort 1.4 outputs to help enhance multitasking and enjoy immersive viewing experiences.

With three options to choose from, the AMD Radeon PRO W6000 series can help you accomplish just about any task, no matter the complexity. Which graphics card fits your needs the best? Is it the top-of-the line W6800 or the mid-range W6600? Perhaps all you need is a Radeon PRO W6400 to boost the performance of your workstation. Let us know in the Comments section, below. 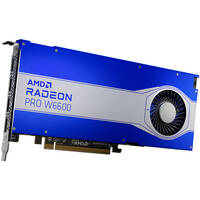 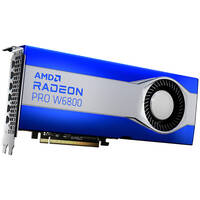 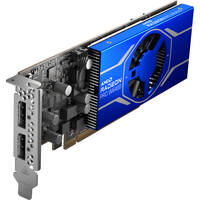